THE KEEPER OF THE VINEYARDS by Irving A. Leitner
Directed by Ken Coughlin 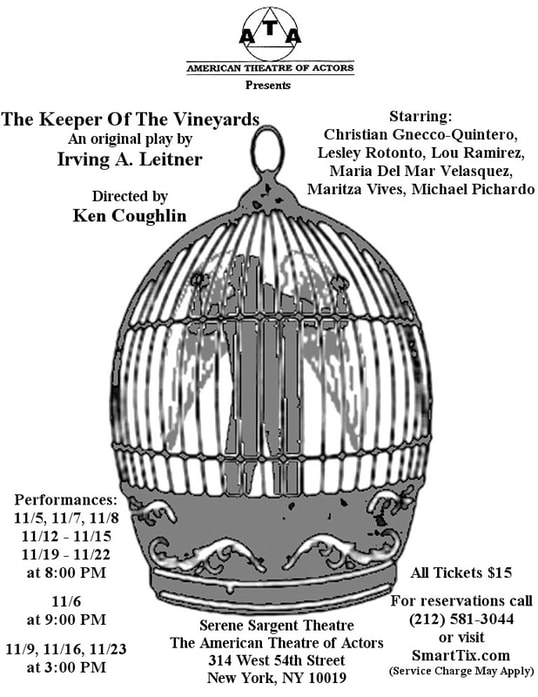 SYNOPSIS​​
The play takes place in the Spanish Harlem neighborhood of Manhattan. The time is the present. We visit the the turmoil cast cast upon the Gomez family, immediately following the death of the family patriarch.  ​
ABOUT THE PLAYWRIGHT
IRVING A. LEITNER​
Irving A. Leitner was a New York-born author and playwright. He was a decorated combat veteran of World War II, having enlisted in the United States Army Air Force shortly after Pearl Harbor and participated in thirty-six heavy bomber (B-24) missions over Europe. Over the years, he has written a number of books for children, including Pear-Shaped Hill, a pictorial storybook that has been translated in many languages and read by and to millions of kids around the world. Other works include science books, a dictionary for young people, books for the general marketplace, and an impressive number of plays, most of which have been produced and staged in New York City. He is the recipient of two Jean Dalrymple Best Playwright Comedy/Drama Awards. On May 8, 1993, Leitner helped make theatrical history in Russia when his play based on his wife’s renowned memoir “Fragments of Isabella”, had its world premiere in St. Petersburg as part of the country’s Victory Day celebrations over Nazi Germany in World War II. On a different level, Leitner’s eclectic interests led to his book “Baseball: Diamond in the Rough”, a Sports Illustrated Book-of-the-Month Club Selection and his notable work “ABC’s Wide World of Sports”.
Irving passed away in 2020 at 91 years old. I am proud, honored and thankful for having had the tremendous opportunity of portraying   the role of the mother in his brilliant play "The Keeper of the Vineyard".​